Born in 1980 in my garage in Santa Monica, California, Hemlock went on to be the largest and oldest right-to-die organization in America fighting for voluntary euthanasia and physician-assisted suicide to be made legal for terminally and hopelessly ill adults. (There were larger organizations but they had what might be called a “passive euthanasia” agenda.)

As it twisted and turned at the whims of shuttling board members, it had many homes: Santa Monica, Los Angeles, Eugene (Ore), and Denver, and lastly combined Portland (Ore) and Denver. Sadly, it never reached its rightful home in the nation's capital, Washington DC, where it could be of most influence.

Hemlock's principal achievements during a stormy life were to:

• Educate and advise thousands of dying people to know how to bring about their peaceful ends when dying, trapped in a ruined body, or just plain terminally old, frail, and tired of life.

• Help was given through specialized literature and moral support. The organization never provided hands-on assistance to people to die because it needed, then, to stay within the law, although many of its members quietly, unofficially, did see one another off.

• Draft and launch the first model law governing euthanasia and assisted suicide in America, 1986, from which many others which were to follow were refined.

• Financially and physically back referenda in California, Washington State, Michigan, Oregon, and Maine. Only Oregon succeeded (1994 & again in 1997). That law remains under Federal Government threat of extinction via the courts.

• Found and launch a national “Caring Friends” program so that maximum personal support and assistance in dying, within the law, could be ensured to every member. No member needs dies alone or in agony. This is a free program. Credit for this program goes to Faye Girsh, Lois Schaffer, Sally Troy and Richard MacDonald. (Now it has a more business-like name: “Client Services”.)

Strangely, Hemlock's cause of death looks to be its very name and success. (Never before had the organization been so large in staff (26) membership rising again, or so financially sound ($3m.) as in 2003. One of the original founders, the late Ann Wickett, had suggested the name “Hemlock” and I (the principal founder) concurred in this, provided it was called “The Hemlock Society”. The striking name of the nonprofit organization was its entrée, its cachet, and its PR flag as it fought the relentless forces of the religious right to be heard as the voice of choice in dying through the decade of the 1980s at a time when Ronald Reagan and Jerry Falwell claimed to be nation's defining moral forces.

Hemlock became to be sourced in medical and legal texts and has become respected as one of the pioneer right-to-die organizations in the world. Few school text books are without a pro-active essay on this subject.

In the 1990's Hemlock declined in membership from 46,000 to 18,000 as other groups, started after state initiative campaigns, also took up the cudgels. Anyway, a maverick little book entitled “Final Exit” showed everybody with $17US to spare exactly how to exercise his or her ultimate civil liberty. See www.finalexit.org. Ownership of the book carried no obligation to be a member of anything.

The noun hemlock can be a conifer tree or a waterweed. It was the root of the weed that was used in classical Greek and Roman times as a deadly poison when death by suicide was either ordered by the state or chosen by a rational person. Today we have lost the knowledge of how to effectively use hemlock as a lethal potion, and probably the ancients glossed over how painful taking it was to die that way. For over two thousand years Socrates personified the drinking of hemlock as a symbol of rational suicide.

And it is today's politicians and their strategists – plus a few focus groups – which condemned the name as “tied to that fellow and poisoner Socrates.” The name, some said, would hinder passage of legislation. The membership appeared divided about the name change; none could suggest a good, prim alternative, although some 400 monikers were considered. Wags suggested the Not-Quite-Dead-Yet Society, the Socrates Society, and the Final Exit Society.

However, Socrates' death in 329 BC was a noble and self-chosen one, and he spent hours discussing with his colleagues whether he should accept the death sentence inflicted by the courts for corrupting the youth of Athens or accept a lonely, barren exile. Essentially, that is what the Hemlock Society was about - not hasty and hurtful suicide, but thoughtful and rational reasons for an accelerated death.

As William Batt writes in an essay “Why Hemlock as a Name and Symbol,' on their website: “The choice of the hemlock root as a symbol of our movement is quite apt for more than one reason. The first because it symbolizes the principle of personal choice central to Socrates' action. The second because Socrates faced choices [exile] unacceptable to him much like terminally ill people today. The third because it focuses centrally on the place of self in society in a way that was vital to Socrates in his time as well as for people living today.”

It appears that contemporary people who know little or nothing about Socrates, or the other ancient Greeks who supported rational suicide, won the day. Some had never liked the name; others saw it as black or gallows humor. And some are worried about its connotations of poison and suicide. Thinking people who had studied Plato and were passably well read regarded Hemlock as a name with special philosophical meaning. Just hearing the name spoken instantly informed many people exactly what its purpose was. But some felt it was too elitist a name.

Putting the case for name change in their newsletter, staffer Jane Sanders wrote: “We [also] need access to the halls of government in the states and in Washington DC – access that the name Hemlock is currently denying us. The name Hemlock has a history of earnest defiance but much of it is also baggage, baggage that we can no longer afford to have weighing us down or interfering with our being able to partner with such important and powerful organizations as AARP”. (A Rose is a Rose. Hemlock by Any Other Name, End-of-Life Choices magazine, Vol.2 No.2 / Spring 2003.) What exactly was in the bags Ms. Sanders discreetly did not reveal to her readers.

Hemlock also lost its famous (or infamous) logo – a wisp of the graceful hemlock weed bending in the breeze – and also its motto, Good Life, Good Death, as Madison Avenue types rushed in to dress up a fresh, politically-correct image. Yet change of designation could spell a huge loss of name recognition and loyalty built up over years. Additionally, its disappearance could mean that many of the public would tend to think that it had gone out of operation, or assume it had changed its mission. Such confusions are inevitable even though hundreds of thousands of dollars might be spent on public relations.

Remnants of Hemlock include its big-spending offspring End-of-Life Choices (Denver) and the loss-making Compassion in Dying (Portland), both now merged and controlled by one new board with yet another name (a fusion of the two?) called “Compassion and Choices”.

The wealthy Hemlock Foundation (worth some $2-3 million) has also modified its name. In a Articles of Amendment filing to the Colorado Secretary of State on 10/29//2004, the Hemlock Foundation for End-of-Choices changed its name to a new entity (surprise!) “Compassion and Choices”. Life memberships were grandfathered. Mission statements? Quietly forgotten. Presumably now there is no existing organization with the name “Hemlock”?

Also alive and kicking are the Death With Dignity National Center, and the Euthanasia Research & Guidance Organization (ERGO). Then, in 2004, those who were dissatisfied with the mergers and transfers (none of which were approved by memberships; they were board decisions) broke away and formed the Final Exit Network.

So, America's 60-year-old right-to-die movement survived all these organizational re-alignments – and shakeout of directors – and pressed on with different agendas, rarely speaking to each other. Nine such organizations in 1996 had diminished to four by 2005. Nothing remains static, even the paths to death.

Perhaps the old rebel organization's tombstone, in the right-to-die nonprofit graveyard, should most appropriately read: 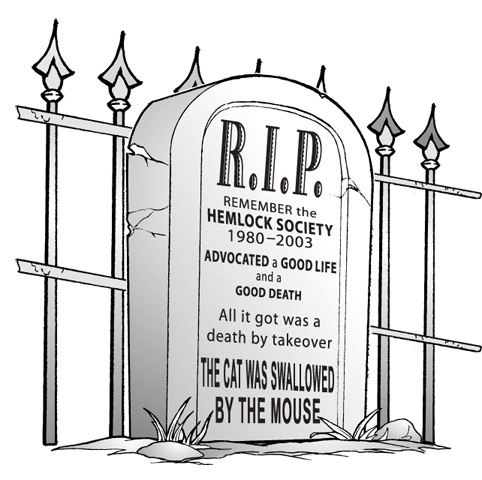 More on this subject can be studied in my paperback book “The Good Euthanasia Guide 2005" obtainable at www.finalexit.org.

Useful websites on this subject:

Formerly a London Sunday Times reporter, Derek Humphry founded the Hemlock Society USA in 1980 and was executive director until he retired in 1992 to write books and lecture. His best known books include bestsellers “Final Exit” and “Jean's Way”. He then founded the Euthanasia Research & Guidance Organization in 1993, which he is currently president. Derek was also editor of the World Right-to-Die Newsletter for twenty years and is currently advisor to the Final Exit Network. His bio is at www.finalexit.org/dhumphry

© 2004-05 Derek Humphry. No publication without permission.

A webpage of the Euthanasia Research & Guidance Organization (ERGO),
based in Oregon, USA. Email:

Visit the ERGO-Store and browse the catalog of books, ebooks, DVD and VHS video, and documents authored by Derek Humphry. Pay securely with a major credit card or e-check through PayPal. Checks and money orders also accepted.